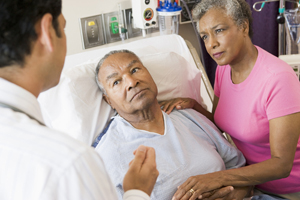 The elbow joint connects three bones: the humerus in the upper arm and the ulna and radius in the lower forearm. The damaged parts of the humerus and ulna are replaced with artificial components during total elbow replacement surgery. The components of the replacement are made up of a metal and plastic hinge with two metal stems. The stems fit inside the hollow part of the bone called the canal.

The outcomes of elbow replacement are generally good and can relieve joint pain and mobility in many patients.  While the success rates for elbow arthroplasty are increasing, the surgery is not without risks.  For example, patients that undergo total elbow replacements are at risk for infection, injury to nerves and blood vessels, allergic reaction to the artificial joint, broken bone, stiffness or instability of the joint, loosening or wearing of the artificial parts, weakness or failure in the tendons of the arm, and pain.

Johnson and Johnson recalled its DePuy Synthes Elbow Implant on December 30, 2016. It has been on the market since June 2012.  A review of the Maude database currently reveals 182 adverse event reports filed with the FDA for this device. Each of these adverse events appears to be attributed to the same defect in the device. When the device is implanted there is an anchor which attaches the device to the patient’s radius bone. This anchor is called the radial stem. After surgery this radial stem comes loose increasing the risk of osteolysis (destruction of the bone), poor joint mechanics, pain, post-operative fracture and soft tissue damage. Some reports estimate that this has occurred in as little as six months after elbow replacement surgery.

In a letter issued to doctors and facilities where the device was issued, Johnson and Johnson stated: “Based on the currently available data, we believe the cause to be multifactorial (including possible product characteristics, operative and patient factors), but we have not been able to fully characterize these factors. Consequently, we have not been able at this time to issue further instructions to surgeons that might lead to a reduction in issue rate and have decided to remove the DePuy Synthes Radial Head Prosthesis Stem from the global market,” the company wrote.

The lawyers of Cohen and Malad, LLP are currently investigating cases involving a failure of the elbow replacement device that was part of the recall.  If you or a loved one had elbow replacement surgery and experienced a negative outcome, please contact us and we will investigate your case.